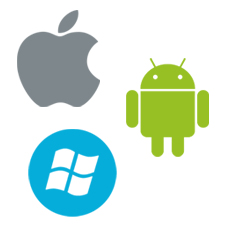 As we know that there are number of mobile platforms available in the market, like Symbian, Android, Apple IOS, Blackberry, Windows etc. And we have mobile application development platforms that helps the developers to build mobile applications for smartphones and tablets.

Google developed the mobile operating system well known as “Android” and used by many. Android is based on Linux kernel and was initially designed for touchscreen devices, for example mobile phones and tablets. Using android the user can easily search for information on web, access maps, watch videos, send/receive emails and lot more on phones.

It allow user to change the theme, wallpaper and launchers on mobile, user can in fact change the complete look of their phone. User can download many other applications on their phones like Facebook, twitter etc.

The other very popular mobile platform is IOs which is basically used by the mobile phone manufactured by Apple Inc. This is the only software which allows the user to interact with IPhones, IPods and IPads. IOs includes almost same features like android.

There are many apps which cannot be run into all the platforms at the same time. So we use sencha Touch which is a framework used to build cross platform mobile applications, these applications can be run on multiple platforms. Advanced features of Sencha Help programmers and developers to build apps more innovative and creative, they can also add Layouts and animations in the applications.