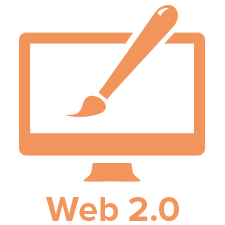 Web2.0 is an online technology which is introduced to describe a second generation of the World Wide Web. The main purpose was to focus on the ability for people to share and collaborate information online. The major difference between world wide web and web2.0 is that it provide greater combination between internet users, developers and enterprises.

Basically web2.0 refers to transition from static web pages into more organized and more dynamic. Lot of improved functions and features were introduced with Web2.0 that was not available in the past, we can say that it came up with the series of technological improvements and became much more dynamic and interconnected.

Blogs was introduced after the launch of this technology and now the user can post their thoughts and updates about their life on web pages any time anywhere. New websites were introduced, for example Wikipedia, in which the user can add and update online content around the world. Most popular websites came up after that, Like Facebook and MySpace were the user can build and customize their profile and also communicate with friends.

Now a broad range of new applications came which helps the programmer to run programs directly in a browser. Young generation is more attracted to Web2.0 for the social aspects where the communications and coordination’s are very easy.

Web2.0 came up with many new popular tools like Social bookmarking, Micro-Blogs, Wikis, Social Networks, Podcasts and that have changed the internet world a lot by more connections, communications and coordination’s.